" A Stroll Through The French Quarter"

First let me say in response to those who have
inquired, my knee is much, much better! I have
been taking Osteo Bi-Flex twice a day and it works!
Thank goodness for that as I had to walk a mile
from where I parked to get to the Master Classes.
Hubby was going to drive me due to bad weather
reports but the sun came out, so I drove down myself.
It being Friday and the festival going on, the place was
really crowded and parking was scarce. For those who
have been to the French Quarter, you have probably
walked this same route. I parked in the lot behind the
French Market nearly to Esplanade. I then walked down
Decatur past all the wonderful shops till I reached the corner
of Decatur and St. Ann in front of Cafe Du Monde. I then
crossed Decatur to walk down St. Ann toward Jackson Square.
This Mime was standing at the entrance to St. Ann Street facing
Decatur. It amazes me how they can stand for hours without so
much as a twitch! I think he is a space man? 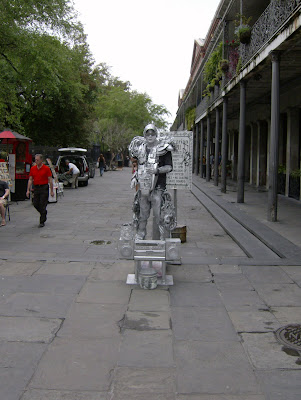 Walking down St. Ann, the Artist line the fence that
surrounds Jackson Square Park. It was trying to rain
so I didn't get as many pictures as I'd like to have. 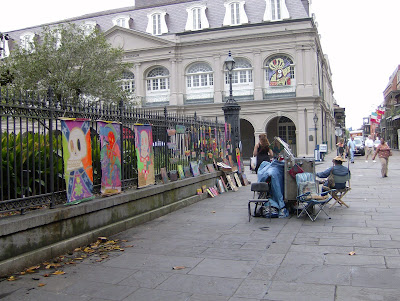 As you turn left into the Square, you see all the Fortune
Tellers selling their talent. 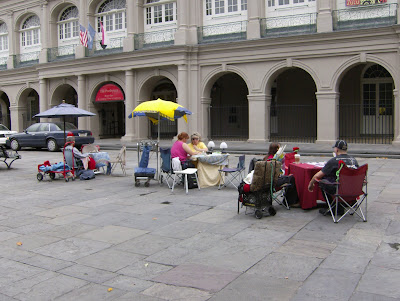 Then you are facing the front of St. Ann's Cathedral 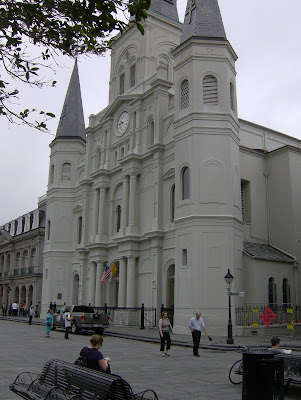 Standing in front of St. Ann's in the square,
this trumpet player was wonderful! I stood
and listened to Amazing Grace then he played
When The Saints Go Marching In. 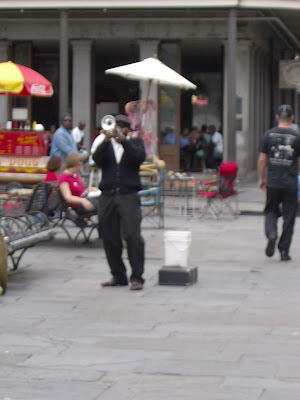 Past the trumpet player I took a right to walk down
Pirate's Alley, past Faulkner House Books. During his
lifetime, William Faulkner kept an apartment over
this bookstore to which he would come to write. 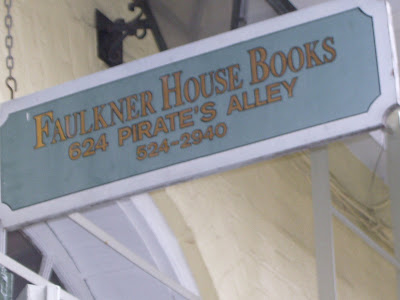 At the end of Pirate's Alley, I crossed Chartres, continued
one block down St. Ann to Royal Street and turned left.One
block down Royal this Jazz Band had people dancing in the
street! I felt like it myself but knew better than to try! I
actually took this picture on the walk back and only the Sax
player was playing. 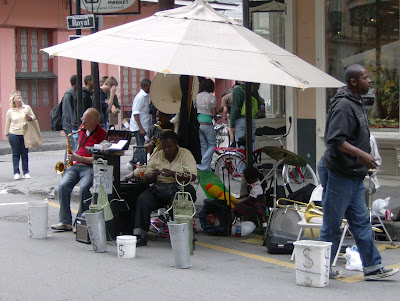 Anyone need a Psychic Reading?? 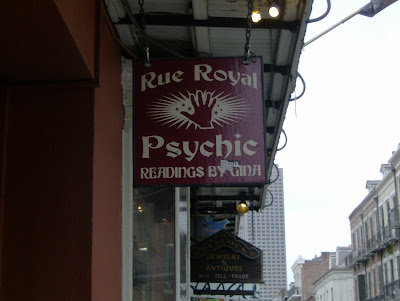 Now this is the right way to tour The French Quarter! 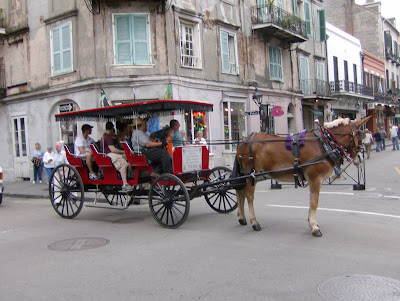 Only in the French Quarter do people hold conversations
in the middle of the street! 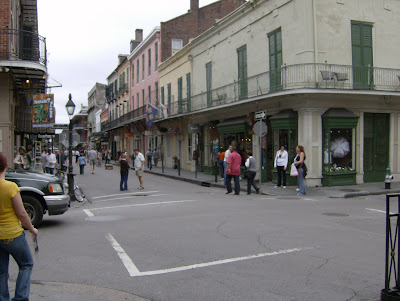 By this time I'm hungry and stop for lunch at my favorite
French Quarter Restaurant, The Court of Two Sisters ! 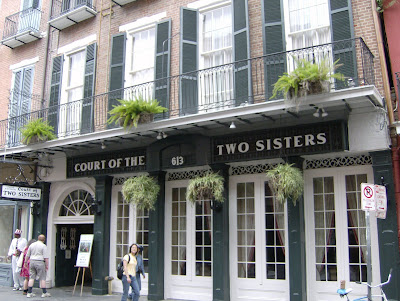 The entrance to the restaurant is gorgeous! 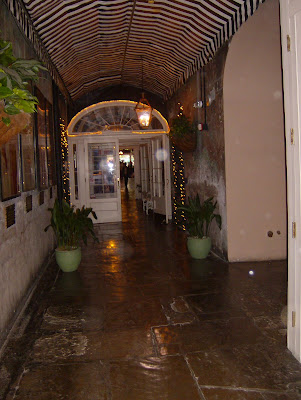 When I came out, this Mime was in front. The
little girl had eased up to him to see if he was
a statue and he grabbed her! 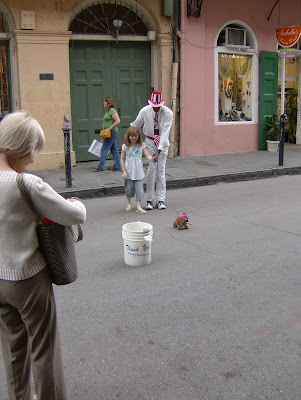 I walked two more blocks to Historic New
Orleans Collection, the Museum where the
Master Classes were held. Of course I retraced
this same path later. About two miles round trip!
Not bad for a woman with a bad knee, huh?
I hope you have enjoyed your stroll through a small
part of the French Quarter with me!
I am leaving for Natchez tomorrow morning to
carry out the plan from last weeks postponement!
I do not know if I will be in touch or not, but you
will see and hear plenty this weekend!!!

Oh Carol, It looks so good and so active now!!! I lived in Nawlins in the '80's---and loved it there. BUT since Katrina, I have not wanted to return to that gorgeous old city. Your pictures make me WANT to return sometime now!!!!

Thanks for sharing.
Hugs,
Betsy
P.S. Don't know where you stayed, but we lived down St. Charles Ave. on a parallel street named Prytania. I worked at Rayne Memorial United Methodist Church on St. Charles Avenue.

I'm waxing nostalgic for that fabulous city. Before I die I want beignets and coffee in the early morning light at Cafe du Monde.

What a fabulous city. Like no other in the country. But...where are the beingnets???

I love seeing the kids on your sidebar, by the way. Edward is most proud!

When we stayed in New Orleans with some friends, we of course visited this part of the city, and actually went into the cathedral - it's beautiful there.
PS I'm glad your knee is better than before!

Oh yes, I forgot to ask how your knee was! Are you going to get physio therapy? Thanks for your fascinating tour in the French Quarter. Have a great week!

Great pictures of New Orleans. I just love it, walking to the park early in the morning for beignets and coffee. The only thing I didn't like were the mimes...they really spook me out!

This is a wonderful blog - Thank you for sharing your trip with us. Your photography is wonderful. Please stop by my garden sometime. I followed one of my favorite garden bloggers to your site.

Oh, I've never been to New Orleans, but always wanted to go. Your pictures and descriptions are wonderful,Carol. And I'm glad your knee is better! Enjoy Natchez!

I enjoyed the tour. It has been years and years since I was there myself.

Have fun in Natchez!