" WHILE WE WERE WATCHING DOWNTON ABBEY" by Wendy Wax 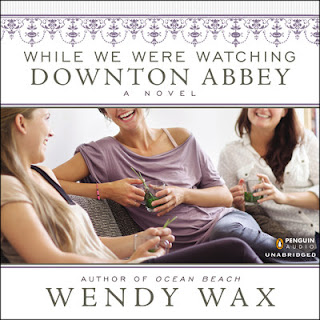 On Tuesday April 2nd 2013.....the wait was over! Author Wendy Wax's much anticipated WWWWDA was released! As a devout " Downton Abbey " fan, I knew I had to read this book, I was not disappointed, it is 354 pages of pure delightful reading!
The characters are diverse and so well written you long to introduce yourself and hang out with them !

In the beginning the only thing they seem to have in common is that they are all residents in the beautiful Alexander........a luxurious, old world charm apartment building in downtown Atlanta where only the ritzy can afford to live.

Samantha Davis....a forty something beauty whose outward beauty screams, " high fluting rich (well you know the type) who appears unapproachable". She married  high profile, handsome attorney,  Johnathon Davis 25 years ago for security when at 21 she found herself an orphan with two younger siblings to raise........... "Samantha is a true case of looks can be so deceiving.".

Claire Walker........ she knew before she said I do that she really didn't! After giving it her best for a few short years, she said;  "I do to a divorce " and set out to raise her young daughter Hailey and become a novelist. Now that Hailey is off to college and with two published Historical Romance Novels under her belt she moves to a studio at the Alexander to write full time where she discovers..........
"you can force a writers butt into a chair but you can't make her think"

Brooke Mackenzie.....mother of two small daughters has just been dumped in an apartment she didn't want to be in , by her ex-husband Zachary whom she didn't want to be her ex. Finding herself living the age old story.... "I worked 2 jobs to put him through medical school, residency and set him up in private practice and I get dumped for Barbie " .
As if that wasn't enough, " Ken & Barbie" decide to move into the Alexander also making Brooke even more miserable!!

Edward Parker..........Downton Abbey fans.......think Mr. Carson with a little Mr. Bates thrown in!
Edward hails from Britain where his family has been "in service" for eons. He now holds the coveted position of Concierge of The Alexander where he sees too much and knows more about it's residents than they seem to know about themselves.

The residents are brought together when Edward decides to make Sunday nights in the club room
" Downton Abbey Night " complete with English food and drinks. They will watch one episode a week of Season 1 & 2 in preparation of  the upcoming Season 3 premiere.

Thus the story of true friendship, mother/daughter relationships and finding ones self starts to emerge in these 3 totally opposite women as they form a common bond. Wendy Wax has placed in our hands a work of fiction that not only entertains but delights us and leaves us wanting more,more,more of both these characters and Downton Abbey !!! Get yours today, you won't be sorry!!!
Posted by Carol Murdock at 4/07/2013 08:37:00 AM 3 comments: