As most of you are aware, I went down to New Orleans
yesterday to attend two of the Master Classes in the
Tennessee Williams Literary Festival. The two I chose
were two of my favorite authors whom I believe to be
true Masters of their craft, John Berendt and Rick Bragg!
Part One: JOHN BERENDT................ 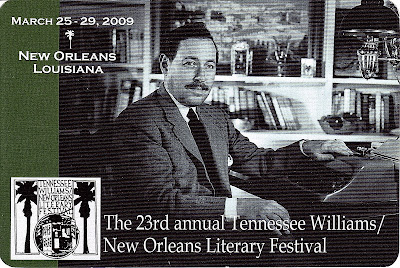 I doubt that there is anyone reading this blog who has not
read his Pulitzer Nominated Bestseller:
" Midnight In The Garden of Good and Evil" or at least
seen the movie..........
I knew about Savannah before John's book came out due
to Eugenia Price, one of my favorite historical fiction authors.
I had read all of her books which are based in this area.
It was John's book however that made me fall deeply in love
with Savannah and long to experience it for myself!

Savannah herself IS the main character of "Midnight"
His class yesterday was about:
" Capturing The Character of Place".............. 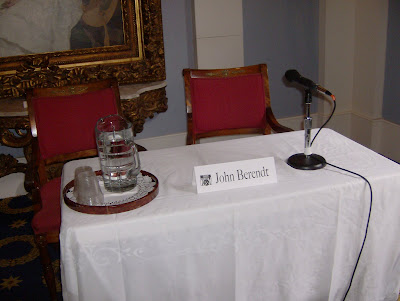 The room where these Master Classes were held was
like stepping back in time to the parlor of a beautiful
antebellum mansion...........
The room filled to capacity and over flowing with
literary minded people ! I felt so blessed to be there! 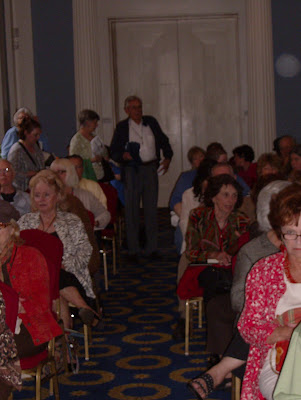 We listened intently as the accomplishments of our Master
teacher were heralded and he was introduced ........ 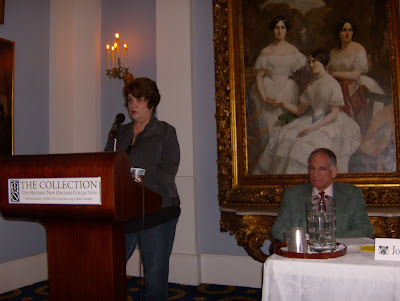 Now all of you know how partial I am to Southern Writers!
They are a special breed, myself included. I often say
" we write with a need to fix the wrongs" especially those
of us from the "deep south" where so much pain and misery
is attached to the backbone of slavery and the civil rights era.
John is not from the south but he truly understands her!
I learned from him that there are, 150 different southern
accents and that in writing place, you have to get it right!


Here John reads the Eudora Welty story:
" Where Is The Voice Coming From"
Eudora wrote this story the night Civil Rights
Leader, Medgar Evers was gunned down in his
front yard in front of his wife and children. It is
a perfect example of capturing "place" as it turned
out to be an exact literary profile of the killer who
at the time of her writing, was unknown! 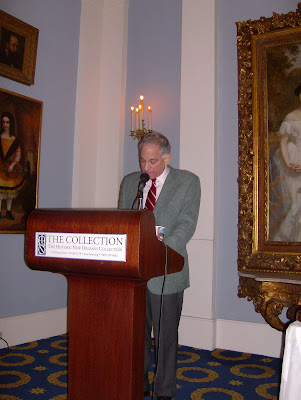 
During the signing, we had an interesting
occurrence. John had never seen this slick
face paperback version of his second book!
He believes it to be a special printing and I
at that moment, wasn't sure where I'd bought it.
Later I remembered that I had actually bought
it in an antique shop in Savannah! 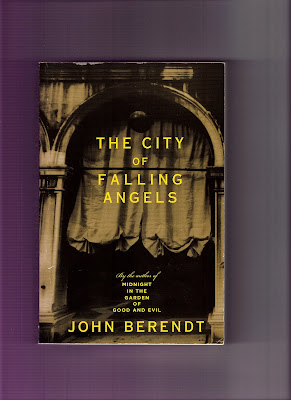 It was truly a wonderful experience to listen and learn
from the man whose writing I so admire! However the
best part was standing next to him to have a picture with
him to add to my collection! I have never been photogenic
but he looks awesome! 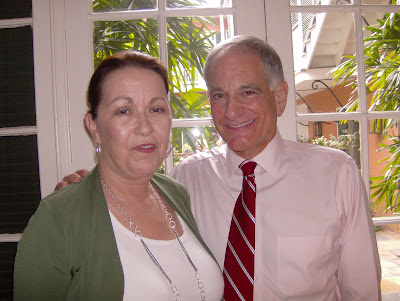 John assured me he would be visiting The Writer's Porch
to view this post, so please leave a comment if you are a
fan of this Literary Master!

A big Berendt fan here! I frequently visited Savannah prior to "Midnight." What a difference a book can make. My first visit after the book filled me with awe. There were "Midnight" Key lime cookies and anything else one can imagine. Every salesperson we encountered asked if we had read "THE BOOK." The city clearly began to market itself as the place where this wonderfully-told story took place.

I thought I had read a lot but now I know that I have to read much more, for I am ashamed to tell that I didn't read any of John Berendt's books. Thanks for telling this fascinating happening you attended. Have a great weekend.

What a fascinating visit you have been on...
A "master" indeed, a wonderful author, full of character, and charm.
I'm officially jealous ;)
Can't wait for the next episode...

Oh, Carol - What a delightful trip you're having!!!! Can't wait to hear more.

I join "NCmountainwoman" as one who was over the moon in love with Savannah "Before the Book." While I adore John Berendt's Book "Midnight in the Garden of Good and Evil" and have reread it many times, I'm kinda sad about the fact that now a beezillion additional people now know about Savannah. It is still a lovely and gracious city, but a whole bunch more crowded than it used to be. big sigh.

VERY much looking forward to his next book! New Orleans, you say? Perfect!!

I am so excited for you to be able to be there! I love John Berendt's quote "If you are a writing place..."
I chuckled at the somment of 150 different Southern accents - since English is my second language, I am not able to distinguish YET which comes from where!

My late mother-in-law was from Savannah -- one of the dearest women I've ever known.

And yeah, you know I envy you.

Wish I had been there. I read 'The City of Falling Angels' without putting it down; something I haven't done in years. Anyone who is going to Venice should read this book first. A marvelous post.
Catherine

Wow, what an exciting weekend with Berendt and Bragg! And all of those incredible southern writers- Tennessee Williams,Eudora Welty,
William Faulkner,and Flannery O'Connor, are my favorites, too! You must be inspired to write! I'm waiting...where's that book? <3

I visited Savannah a few years after reading Midnight in the Garden. The story of the book speaks for all that represents that beautiful and mysterious Southern city.

I meet my own colorful character sunken into a broken down recliner in the middle of his crammed packed antique story. He was ready with a story and talked to us as long as we browsed his shelves.

Berendt is a good writer but no Hemingway...I like Pat Conroy too...Savannah is a fine town...

Sorry I'm late, Carol. Was gone for a long weeked myself, and just got home.

What a wonderful time you are having. It must have been awesome to see and hear Berendt in the flesh! What a great post. Looking forward to part two.

I loved Midnight in the Garden! If one has ever spent any time in Savannah, one knows, it captures the spirit of that old city perfectly!

Really enjoyed this post, Carol!
And as I'd previously said, I also just LOVED Midnight in the Garden of Good and Evil.
I so agree with John. In my own writing, a sense of place always has to come first for me and then my characters and plot follow. My first novel was, of course, the Boston area but with my new release I knew I was in my element having Cedar Key as my setting....everything else fell into place.
I thought you were both awesome in the photo! Thanks for sharing all of this.
Terri
http://www.islandwriter.net

I've seen the film, but I'm certain it can't have done the master's book justice. By your erudite description, Carol, I just know I've missed out by not reading it. Forgive me; I am a Canadian, after all.
What a wonderful experience for you! You truly WERE blessed.

Mr. Berendt, I will take your advice to heart regarding writing about place. Even in poetry, it is often critical to get that right.