Those of you who read the bible are aware that Luke 4:23 is about NOT condemning others as you are not without faults yourself. For me it has a double meaning in that we ARE the physicians of our own body.
It was a year ago this month that I began to see a real decline in my health. If you recall I got a severe upper respiratory infection that put me on antibiotics, steroids and inhalers. That led to throat cancer symptoms which turned out to be some weird acid reflux that left me on more steroids and Nexium. After all this medication, which I am vehemently opposed to taking, I have been unable to regain my strength and stamina back. I seemed to have no immune system worth anything and the day after my Dad's funeral, I woke up with another severe upper respiratory infection! I decided that I'd had enough of Western Medicine, it was time for the Physician to heal Herself! I began doing research via the Internet, watching health documentaries via TV and Netflix and reading books! 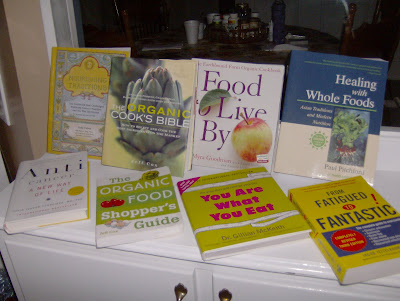 I already believe that alternative medicine IS the way to go, have studied and grown herbs for years. Have an alternative medicine library that would rival most doctors but just didn't practice what I knew. I also did not know half of what I really needed to know!
There is a health show on Dish Network/Veria Channel 218 called The Incurables.
I set my DVR to tape it and have so far watched 18 episodes. The show is about people who have been told by Western Medicine doctors that they had incurable Cancer, MS, Parkinson's. Each of these individuals turned to Alternative Medicine, changed their diet and ARE CURED! Most were stage 4 B cancer patients and some were given as little as 4 weeks to live! Below is one of my favorite episodes about Andy Aubin. Please take the time to watch and be amazed!
Most of them can be viewed via YouTube. Valerie Mason's story is also a great one to watch!
Let me know your opinion please?

I'll have to come back to watch the video. I'm so sorry to hear you are still having problems and not feeling good. I've been wondering about you. Sometimes it seems we are spinning our wheels don't get anywhere with the doctors. I hope you can find something that works for you soon or that the docs can find out what your problem is. Prayers for you Carol.

Oh honey, I'm with ya all the way on that!!! I believe that this miraculous body God gave us can heal if we treat it right.

I saw a show on Dr. Oz where the first two rows of people were given death sentences by their doctors...years ago...than they all used diet and natural methods to heal their cancer.

I'm not totally knockin' doctors. I believe God uses them also but far too many just want to give us a pill and shove us out the door.

God bless you on your journey to great health sweetie!!! :o)

I'm sorry for all the healthissues you are having. I have been there and done that as the old saying goes. Everything fell apart with me overnight it seem. But the one thing I have found out is natural medicines do work. I'm living proof. Back in 1992 I was diagnoised wit a bladder condition called IC. It's hard to spell the whole thing and you may have heard of it.There's never been a cure. My uroligist tried everything with me and I met a lady with the same condition, which is now my best friend. She introduced me to a new Aloe Vera capsule that's freeze dried and only one company in the world makes it. I take several of these a day and so far it has kept me out of the doctor's office for about five years now. He was even amazed and took the information down to give to other patients with this same condition. There are things like this out there to help. I have Refux and I have been on Prilosec 40 forever it seems. I wish you the best and God Bless you.. Susie Swanson

So sorry you've been feeling puny! Hope that you're on the right track here and can get all that energy back.

I hope you start to feel better soon! Please try focusing on your breathing as well. I have been told that proper breathing habits help the immune system too.
God bless you!

I'm just glad to hear from you! Also happy to hear you have found a way to heal and take care of your body. I believe a lot like that too. But, as humans, most of us fall short of doing just that. Good to hear from you.

There is another idiom "we are what we eat." I am slowly changing my diet. I can only work on so many projects at one time.

Losing is much harder, but working at that. I quit Nexium a week ago and the medicine to regulate my rhythm suddenly is working perfecty as is my b/p medicine. You certainly can take too much medicine and, I might add, see too many different physicians who add their own treatments to your regimen without much regard for what you already are on

Good to hear from you. and Wishes for a whole healthy being physically, mentally and spiritually.

Muwah~!! So glad to find a posting in the blogosphere, dear friend...Indeed, physician heal thyself..I have been working with different scenarios in healthy eating since I had troubles with many things..I am a subscriber to garlic daily and lots of it...I also believe that we should inbibe in many things that our bodies seem to signal as "cravings"...For instance..a great GREEN salad, and I love to dress the salad with only V/O....All manners of peppers are so very great for digestion and fiber...I eat all types..I also want to use Fish Oil tabs each day and use them along with a .81 small/dose aspirin..I am on NO medication and feel fine...Oh, old age stiffness and some pain, but I like spicy food and feel better without red meat! We eat only "Feather and Fin" ....And, really not much of that...We eat blueberries, drink pomogranate juice when we can...I wish you well upon your food investigatory journey~!! Have MISSED YOU~!

I'm so sorry this has happened. I sincerely hope you find the solution. I find your comment about reading this stuff for years, but not practicing it, quite true to myself. Sounds like you've had a full year of despair. Rest.

Take good care, Carol. Sending you good thoughts. And, how are those chickens?