You toured Swiftwater Farms grounds with
me yesterday so I thought we'd leave the
flat land and pines and go back to the mountains
today! Flat Rock, NC, where I had a fabulous
tour guide by the name of Sherry Austin.... 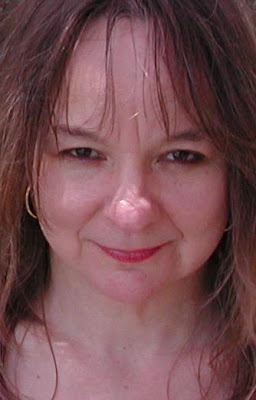 The author of three wonderful books and working on her
fourth, Sherry is also a lover of Appalachian history which
made her the perfect one to show me around Flat Rock! 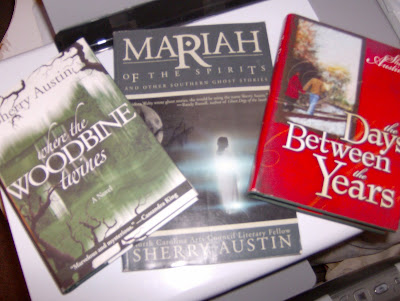 You've already went along on our tour of St. John In The Wilderness Church
and I plan to take you on our tour of "Connemara", Poet Carl Sandburg's home
in a later post, but first I want to give you a little a little history of Connemara.
Remember on our earlier tour we learned of Charles Baring who came from
Charleston in 1829 and bought land then sold to friends from Charleston.
We saw the Boyd House that was built by Count Marie Joseph deChoiseul.
In 1838 a man named Christopher Gustavus Memminger came by horseback
with his youngest son Edward ,to Flat Rock and stayed at what was then known
as The Saluda Cottages, with the Count and Countess deChoiseul. The Count
then helped him to purchase land from Charles Baring and he built a summer
home and called it "Rock Hill ". It would later come to be known as "Connemara"
His son Robert built the home where I stayed, now known as "The Flat Rock Inn B&B." 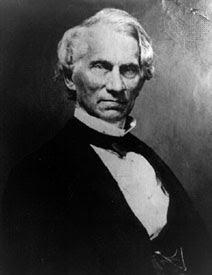 C.G Memminger was a lawyer and statesman who
would become important to the Confederate Cause. 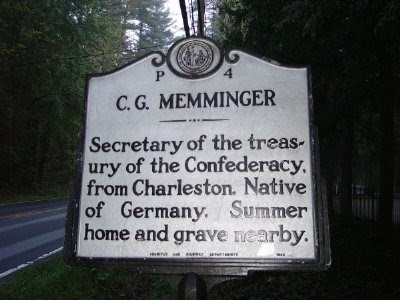 The graves of C.G. Memminger and his wife Mary
in the St. John In The Wilderness Church Cemetery 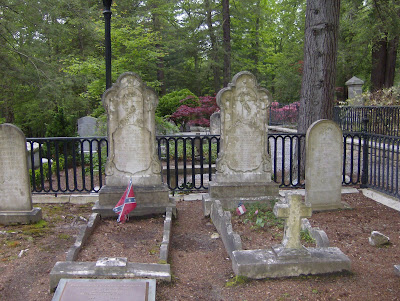 Another historical place we visited was "The Woodfield Inn." It is across the road from "Flat Rock Inn B&B." Built in 1852 on 28 acres, it was called "The Farmers Hotel." It served as the first stage coach stop along the Old Indian Trail. During the Civil War, Confederate soldiers were garrisoned at the hotel to protect the Flat Rock community. The soldiers hid gold and jewelry from the Union Troops in a secret room still accessible from one of the second story rooms. The formula for making gun powder is reported to be written on the wall of the secret room. the Inn is now under going a renovation. 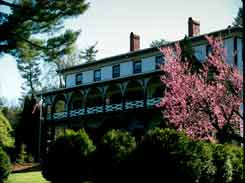 We also drove by the famous " Flat Rock Playhouse." Founded in 1952 by Robroy Farquhar and his company of Vagabond Players, it is now listed as one of the top 10
theaters in America. In 1961 is was designated the State Theater of North Carolina. 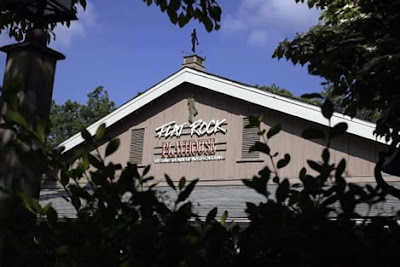 One of it's regular performances is of course, the Henderson County native Thomas Wolfe's, " Look Homeward Angel" 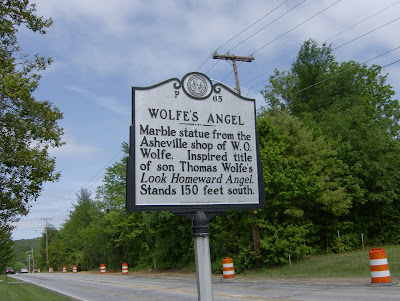 Who after all these years is now behind bars for her own protection! 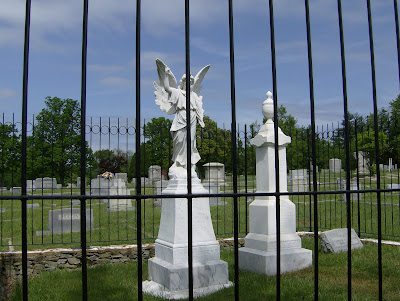 On my trip to Flat Rock, I saw no scenic views except for the nightmare in Hotlanta !!! When I got to my room at the B&B, I had my own private porch to sit on......... 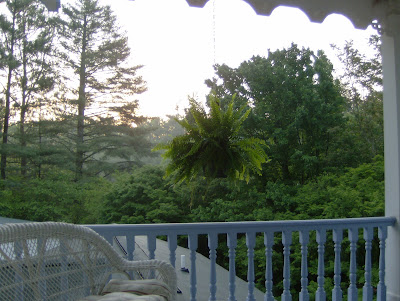 It was so serene to drink my morning coffee out here..... 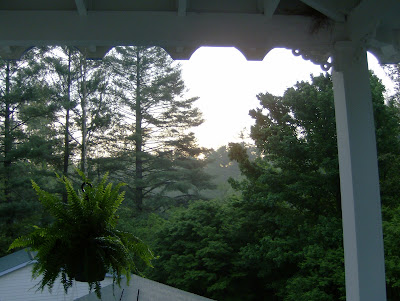 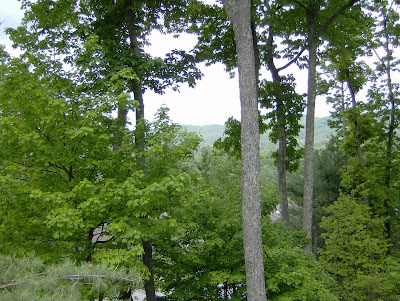 She says in the Winter, this view is awesome! It was pretty awesome to me in the Spring! 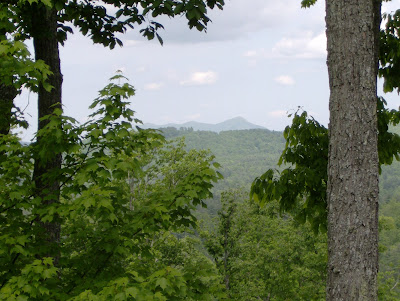 Upon exiting the Hotlana nightmare, I swore I would not return home via Atlanta!! In fact I never want to drive in Atlanta ever again if I can prevent it! So I went home via Asheville, Knoxville, Chattanooga. What a difference it was! 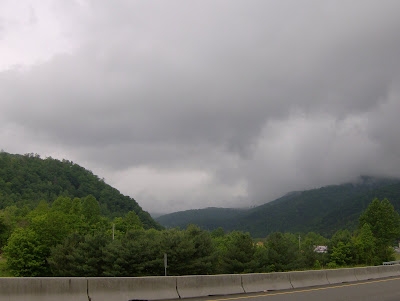 When I passed the exits off the Interstate I missed my friends whom I'd just had so much fun with! When I saw the Sylva exit, I thought of you Gary.
When I saw Hot Springs, I wanted to get off and come see your farm Vicki!
Kat, the Maggie Valley sign ,almost made me exit!
Carolyn, you know the Brevard exit made me sick you were out of town and I missed seeing Lucy and Ellie and of course YOU ! 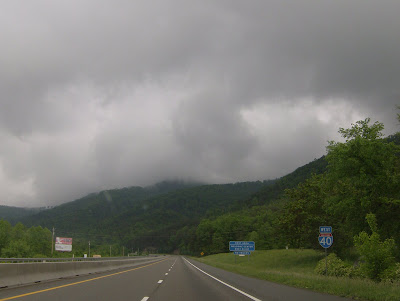 I almost talked myself off here to ride through the GSMNP! 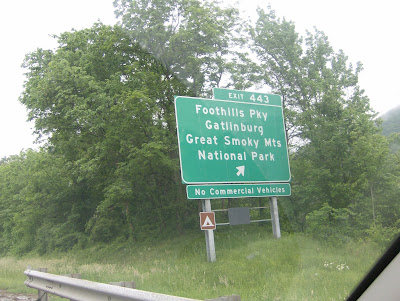 Thank you God I saw beautiful Appalachian Mountains all the way to Birmingham
and no traffic jams! 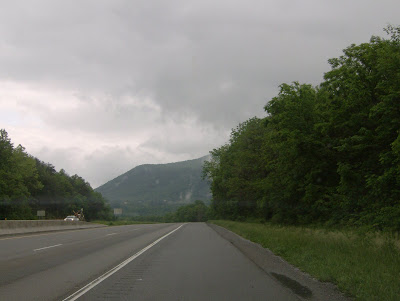 Even Chattanooga was a breeze to get through..... 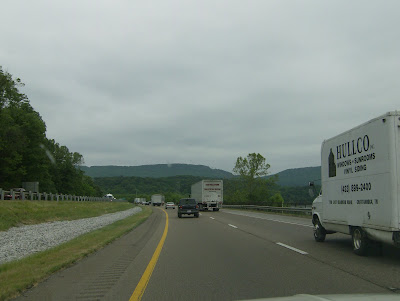 I'm jealous! I would love to meet Sherry! I really love her books, and I am excited to hear she is working on her 4th. Thanks for sharing your pictures...they are awesome!

You take the most delightful excursions, Carol! What a beautiful drive, too.

I often wonder at the treasures hidden for safekeeping during the Civil War and how many of them are still waiting to be found.

On behalf of Sherry Austin, that gal who helps me out, I thank you all kindly for your comments.

Oh! I must've left my head in the pantry: I also thank Carol for putting up such pretty pictures and comments and sending them worldwide, that Trixie Goforth's fame and glory will spread yet farther. It's hard to be humble in the face of such acclaim, y'all. I'm standing in the need of prayer.

Missy...I'm hoping you get your chance because she wants to meet you too!

Willow....you are welcome to join me anytime!

Vicki....I plan on getting in "your kneck of the woods"
this fall! I hope it don't snow again!

Katherine...I pick up 75 south in Knoxville to
Chattanooga/ Birmingham, so I didn't pass your exit. When I go back to Townsend, I'm coming to your house for FOOD!

Trixie....you just the sweetest ole thang ever and that Sherry adores you and you are so lucky to have her helping you get your fascinating life in print!!!!
You gone be SO famous honey!

Well Carol, IF you ever get to this area, I want you to stop and see us.. Okay?????? You were fairly close when you left Knoxville --to go through Chattanooga.

Flat Rock is a beautiful area of NC. I always tell Carolyn that she lives in the closest thing to Heaven available (since she is nearby in Brevard).

Have a wonderful day.
Hugs,
Betsy

Beautiful photographs of our lovely mountains. Your porch view looks absolutely wonderful. Such a nice post. Hope our paths will cross on one of your trips out here.

Speaking of Kat in Maggie Valley...I just finished her "Tender Graces." I really liked it and I'm looking forward to more.

BTW: Have you started your manuscript yet????

Betsy...had we known, on Mothers Day we were moments apart when you came through Flat Rock!

Carolyn...I hope you go to the fest next year! Kat will be so glad you loved TG and yes, Virgina
Kate's story continues as we speak!
Actually, I have!

Oh, look at that, would you! Sherry Austin, one of my favorite people. I still tell all of my friends about "Miriah," which is my favorite, especially the first one with the fog and the folklore creature, old... is
Clew eye? Help me out here! Now, aren't you glad you two met?

I will look up Sherry and see if I can reserve one of her books at my library.

Carol, thanks so much for sharing your obvious love for history. It is like being on a tour myself when I read about the places you've been.

Thank all of y'all, and Sherry thanks you too. Hey sweet Gary, who reviewed MARIAH a long time ago. I love and praise you for your comments. Most people who read all three books like DAYS BETWEEN THE YEARS best, and a few like WOODBINE best, but there are still hold-outs for ole MARIAH.

Gary....she's one of mine too!
As well as that ole storyteller
Gary Carden!!

Jen...do that! Days is my favorite!
It's all about our resident follower, Miss Trixie Goforth!
I DO LOVE HISTORY! Espeacially Appalachian history! I'm glad you enjoy my adventures!

There is so much beauty in this country that I have never seen. Thank you for sharing it more of it with us. I love old cemeteries. That looks like a beautiful one.
Beautiful photos.

Carol - Another lovely tour!!! thank you!

And I hope you'll add Boone, NC to your list of places to visit when you meander off the beaten path - love to have you!

I can't wait for the Carl Sandburg post. He's one of my favorites. Did you know he owned goats too?

I also love history. I love the stories and I imagine what it was like then. What a beautiful drive you had. I don't blame you for avoiding Atlanta. Pick me up on your way to your next trip.

What lovely places you have visited, and thanks for sharing all that history with us.
I can understand why you would avoid Atlanta, it's nerve-wracking traffic.
Keep burning up those roads, and sharing your fascinating trips with us...at this rate, I won't have to leave the house for a holiday ;)

Belette....St John's,Bonaventure in Savannah and Natchez City are the prettiest I've ever seen in that order!

Kaye.. I'd love to add Boone as you are also close to Valle Crucis!

Jo..there's nothing like the real thing, pictures just can't capture it as well!

Don't you just love North Carolina?! Such a beautiful state. I am glad you have such a lovely time.

What a wonderful trip, Carol! So much history in that area. Thank you for showing Wolfe's angel -- what a thrill to see his muse!

I've traveled over the Great Smoky mountains once and saw Cherokee, Chattanooga and Gatlinburg -- such beautiful country!

Hi Carol, thanks for this tour! You always find interesting historic buildings and what's more a wonderful scenic route. Thanks also for commenting on my blog. Have a great SWF and weekend.