Post of The Day Award from: David McMahon @ Author Blog 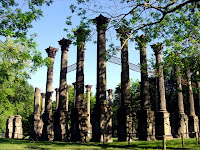 The Windsor Ruins is the site of 23 Corinthian Columns
left at what once was, the site of  Windsor Plantation Mansion. The columns cast iron caps were shipped down the Mississippi River via steamboat from St. Louis, MO in 1858. The mansion was completed in 1860 at a cost of $ 175,000.00. The mansion was built by Smith Coffee Daniell II, who died two weeks after it's completion. The property remained in the family until 1974 when four great-grandsons of Mr. Daniell, donated it to the state for historic preservation. The site is located in the rural area of

Lorman, MS near Port Gibson,MS. off Hwy 61 between Natchez and Vicksburg. General Ulysses Grant declared Port Gibson, a "town to pretty to burn" during the Civil War. The house burned in 1890 after a carpenter working on the third floor, carelessly dropped a lit cigarette in a pile of debris. The ruins were used as a scene in the movie : " Raintree County"staring Elizabeth Taylor
and Montgomery Clift.

A couple of years ago, Hubby and I decide to take the 150 mile day
trip to visit the area. We toured the ruins, then went to visit Alcorn
University, where the two sets of cast iron spiral staircases from Windsor Mansion are now. We then returned to Hwy 61 and made our way to Grand Gulf, MS to visit the Grand Gulf Battlefield and Civil War Museum. It was there we learned that there is a family cemetery on the Windsor grounds. So, back to Windsor we go. We love old cemeteries.

As I mentioned before, this is a very rural area. The ruins

are about a quarter of a mile off the main road down a dirt road barely wide enough for two cars to pass. If you look at the photo of the ruins, on the right side of the photo, count down the right side to the fifth column. You can see it is disintegrating. The road curves to the left at the right end and you park in front of the ruins. Just as we got to the right corner of the ruins, a man steps out beside the disintegrating column. It is amazing how fast the brain computes what the eyes see ! In a matter of seconds my thoughts were. Where is his vehicle,
what is he doing in the middle of nowhere with no car? Then my eyes and brain came together to compute what I was really seeing! A Union Soldier in Uniform ! A full fledged apparition!


Did you see that, we both exclaimed at the same exact moment? If you saw a Yankee soldier in uniform, I said, then yes I did ! That's exactly what I saw he says. We then compared notes as to what we had seen and thought, while deciding if we were safe to exit the car. After calming ourselves we then set out to locate the cemetery. After about 30 minutes of traipsing through some pretty ruff thickets, we found it. What once must have been a very beautiful and peaceful place, was now over grown and deteriorating from decades of neglect. Some of the most artistic monuments I've ever seen, were now toppled and crumbling. The prominence of these inhabitants, long ago forgotten. A three foot hand built stone wall surrounding it, had been taken hostage by wild vines. So sad, I thought when I saw the graves of Smith Daniell and his wife, along with their children and the wife's parents, among other family members.


We headed back to our car and went back to Lorman to have a late lunch at one of our favorite places to eat the Old Country Store, housed in a two- hundred year old former feed store, is a restaurant serving the best fried chicken I ever tasted ! Mr. Davis prepares a country buffet that will rival any Southern Dinner on the ground you ever attended.
We head in and after hugs and hello's, we exclaimed to him; " we just saw the ghost of a civil war soldier at Windsor " ! Ohhhhhhhh he drawls, you saw, The famous Ghost of Windsor. What do you mean famous, I never heard there was a ghost at Windsor? Oh yes, he says, he is famous but of the hundreds of people that visit that place every year, only 3 or 4 people ever get to see him, you folks sure are lucky! A full bodied Union soldier ghost he says, ain't that something ? Since we know that General Grant seized the house and grounds for the use of his troops after the Battle of Bruinsburg and it was used as a hospital for the wounded, we can only assume that the ghost must have died there.

Now I had long believed in the Paranormal as the result of having spent three days in a haunted house in 1974 when I moved from Hattiesburg to Nashville. Hubby was on the border of belief because of an experience as a teen with a Green Orb that chased him and his friend. This was our first sighting of a full apparition however. It made ghost freaks out of us from that day forward. I can still see him plain as day...........I'd like to go back, soon! Think I could get that lucky twice? ?

Hi, Carol, thanks for stopping by. I just added a note in the comments on that mirror post, but the answer is yes, you glue the molding directly to the mirror, not the wall. So you don't have to have extra space around the mirror. I'll do a post later with all the steps, but if you want more info go back & read that comment.

WOW! You are lucky! What a cool story!

Thank you for your words of encouragement in your comments on my blog. They helped a lot to know that another mother has felt this way too.

Interesting post. My friend went somewhere near there to look for a ghost-maybe the same one. I just thought it was entertainment. She didn't see him!

What a great story! I love hearing things like that - especially when it involves the Civil War.
Actually, the whole day sounds wonderful - beautiful rural America.

As you know, Carol, Revolutionary and Civil War stories so intrigue me! Ruins, cemeteries, sites...ah! I can't get enough of them. Most of my experiences with these places, unfortunately, has been in books, both nonfiction and historical fiction. So nice to meet another history buff!

Sounds like something I saw recently on a documentary.

I love that part of MS, there is so much history there...just could do without the smell of the paper mill in Natchez ;-)

Thanks for sharing the story, I found it so interesting.

lovely tale.....congrats on POTD with David

Congratulations on winning David's Post of the Day Award! Richly deserved, this is such an exquisitely told, mesmerizing story, it had me spellbound to the last line! It would be a dream to be able to visit these ruins myself one day.

Should you ever visit Washington DC, drive out to the city's Arboretum. Not only is it a marvelous showcase of plants and garden architecture, there are also columns there, salvaged from some other part of the city. I hope your place does get some help, to preserve what is still there.

I love nothing more than a ghost story...we have a few of our own...this was a great read. Congrats on the Post of the Day at David's...
Sandi

Dear Carol,
I was hanging on every word! Visiting you via David McMahon's blog and looking forward to visiting with you again. I may possibly be able to help with your post problem - try this - Open your post editor again, scroll all the way down to the bottom, click on your cursor and keep hitting backspace until you've gotten close enough to the post. Then hit publish again. Sometimes - depending on if you hit block quote or not - you may have to click on the eraser icon each time. I have had this problem often because I'm obsessive compulsive about going back and fixing things, which gets me into all sorts of technical conundrums! Hope this helps!
A wonderful post!
Catherine

Honey, I just want to thank you for your mighty fine blog. You surely have some nice things on it. That Sherry Austin, the gal who helps me out, appreciates your putting some of her books on your shelf. It's a fine and interesting part of the world where you live, and she'd love to see it someday.

I was having goose bumps reading this, Carol. We go there a lot since we are not too far from there. I am afraid of ghosts so I probably won't walk freely there now. What an incredible story!..Christine

So I made it over and I'm very glad I did! That is quite a siting! I have had many paranormal things happen to me so I belive you, completely. That had to be quite a shock to see him, dressed in full uniform. Chilling.

I was there TODAY!!!

I wish I had read this first!!!

Did you notice what appears to be.a couple standing between column 4-5 or top picture.of ruins?Woman.appears to be wearing wedding dress with veil. Man stands to the right in solider uniform.

Curious to know if anyone else sees that.

Carol, did you happen to take a picture of the old cemetery? My third novel titled "Delta Midnight" is centered around Windsor Ruins, Rodney, and the old cemetery. I love ghost stories and mine is a take off on the real ghost. You might like books 1 and 2 - Delta Crossroads and Delta Gold that set the stage for Delta Midnight. I'll be checking out the ruins soon. Thanks, Michael Cravatt

Visited the ruins recently and traveled on to Grand Gulf State park. The museum had a print of Windsor Ruins you signed. Are they available for purchase?