We had some real excitement around here yesterday! Nope, we didn't see this! We saw something better! Miss Trixie GoLay lived up to her name and labored away to give us our first egg on Labor Day! 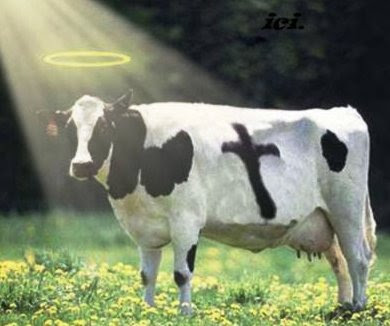 Hubby decides through trial and error of watching the show that the coop needed some renovations. He lowered the nest boxes, put a roof over them and built a ladder to them. 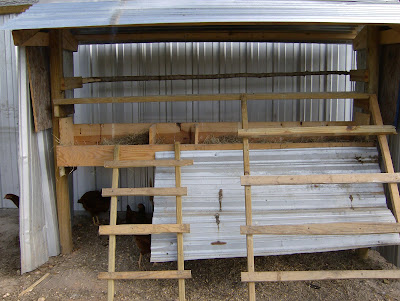 There she is..........Miss America, I mean Miss Trix getting ready to show out! Yep! That's Madame Willow taking a lesson in laying! 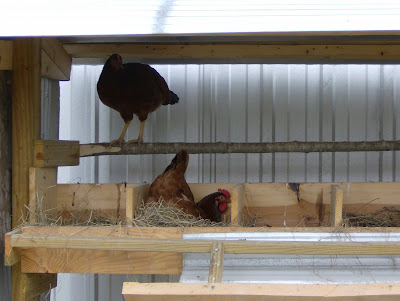 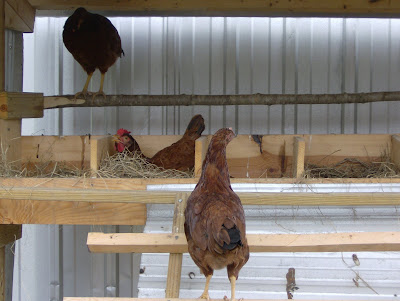 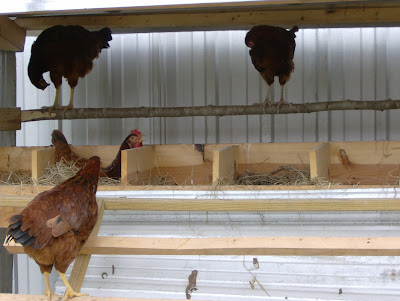 And....then there were three girls trying to figure out what in tar nation is going on??? 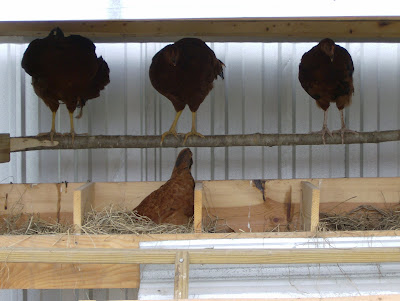 Even Ole Oscar is thinking what a short day this was!! That's Queen Vicki on the ground trying to decide do I or don't I go up? 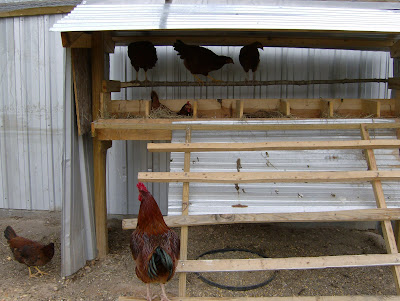 Well, she sat there and sat there till the others said; "to heck with this" and got down......then she scrunched way down....... 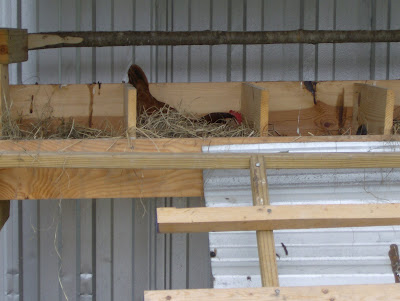 Then all of a sudden, she raised up and "blew" up like a balloon! 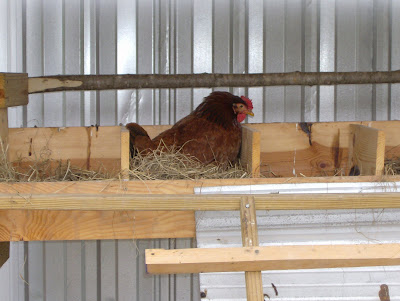 Then she started cackling!! OMG! The other girls froze like statues! The Rooster started cackling with her as loud as he could! The dogs, who were in the fence went crazy thinking someone was killing me I guess! LOL! It was a Circus! 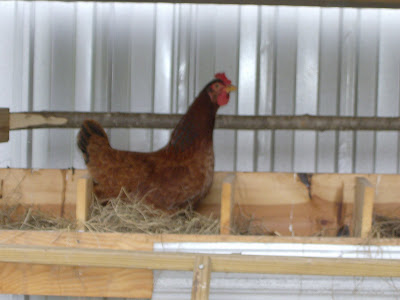 Trixie got down and we rushed to look! THERE IT WAS! OUR FIRST EGG! Clean as a whistle
and perty as a picture! 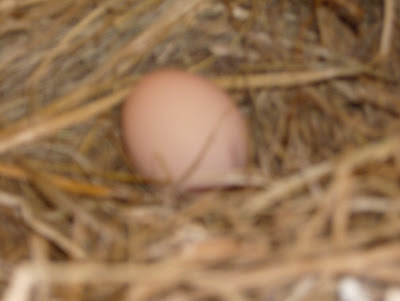 Now I got several e-mails yesterday about Trixie GoLays name! It was real easy to come up with! Miss Trixie is the namesake of one of my favorite people! Miz Trixie GoForth whose fame has spread far and wide via FaceBook! She also has a blog called Pure T. Gossip With Trixie
where she sometimes post. Miz Trixie is the alter ego of one very creative and talented author Sherry Austin whose wonderful book "Days Between The Years" chronicles Miz Trixie's life!
This is Miz Trixie now at age 83 !

Here we see just what a young and desirable beauty she was LONG ago! 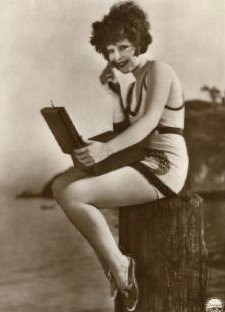 Not long ago, she died and went to Heaven but she was able to escape after a few weeks because St. Peter did not feel she had sinned enough! (Now that was a real joke) While there, she could look like different stages in her life. Here she meets up with an old Beau and they look just like they did when they were sweethearts! ( Don't we hope) So now you know where Miss Trixie GoLay got the wonderful named she lived up to immediately! HA! 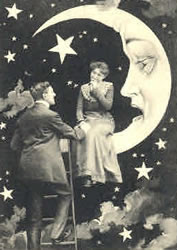 This is my little herb garden...............It also has a Red and a Yellow Bell Pepper plant in it but they are taking their sweet time about turning! 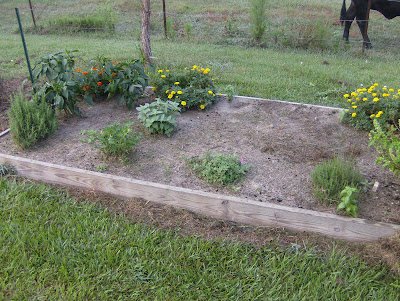 This was the bed where we grew almost 200 pounds of tomatoes off 6 plants! I cleaned it out yesterday so I can plant 3 kinds of lettuce and a cherry tomato plant in it! Which I'm going to do right now! I have to take my Dad to the Doctor in a little while so I'll see you guys later!! 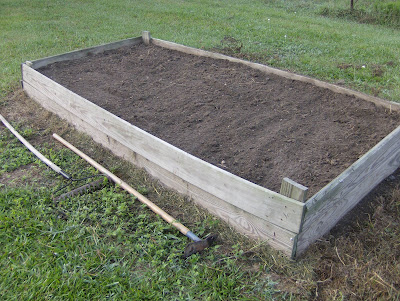 A lesson in laying! That Trixie is a talented old biddy!

Perhaps you could get a bantam hen and call her Chicken Little?

Good luck with your lettuce. I am thinking about planting some in a big pot on our upstairs deck. It's the only place I can think of that the rabbits might allow us to have a little of it.

Why, honey, I thank you kindly for the attention, which I do so sorely crave. You're a real darlin', yes you are.

Congratulations on the first egg!
I was just flabbergasted that you can get 200 lbs. of tomatoes off of six plants. Hey, I could grow them on my little terrace!
Have a great day, Carol.
Catherine

Congratulations! Now she is the queen of the whole flock/gaggle.(What's the right word?)

The first egg, what a prize. They really do put of a ruckus when laying.

Great egg story and pictures! I'm amazed Trixie allowed you to photograph such an intimate moment. :-)

I am laughing so hard that I will have to redo my makeup before returning to work. I hope I was suppose to laugh because it was funny. I love those chickies.

Congrats on your first EGG... Miss Trixie did LABOR on Labor Day, didn't she???? Pretty soon --since the others are "looking"---you'll have lots of egge I'm sure...

Hope your lettuce and cherry tomatoes do as well as your big tomatoes did.

Have a great day. Hope your Dad gets a good report.
Hugs,
Betsy

Forgot to meention that I like the new template and header. Nice!!!
Hugs,
Betsy

I love what you've done with the place, (your header and all), and I love the chickens. The first egg, too bad you can't gold plate it. Or did you eat it?

Well, I'll be! What a wonderful first!

A big day for Trixie! That's wonderful. It looks like all your hard work with the garden and coops is really paying off!

Have you saved the egg ? I would be tempted to blow it...
You have a beautiful chicken coop, it just keeps getting better !
Love your herb garden, ideal for keeping the weeds managable.

LOL! I enjoy reading your blog!

I loved your little chicken soap opera. Well, is it going to be fried,scrambled or boiled?

It's so fun to visit your farm, even if it's through the computer!

It was great to see Miss Trixie Goforth being outted here!

Love especially that picture of the cow! Will have to check out Miss Trixie's blog and book, sounds interesting.

How fun to actually see one lay an egg! I've not witnessed that yet. Much too fun!

The first egg is always a huge event, and congrats to Miss Trixie, as she will forever hold that honor!

My summer garden is about done, except for a few tomatoes and green pepper plants. My fall garden is coming along nicely and whatever we get out of it before the first frost is always considered a bonus.

Oh, congratulations on your very first egg! Hope there will be many more to come although the other hens may have been put-off by the noise made by miss Trixie!

It's so exciting when you get your first egg , loved the story behind it.

Congrats to you and Trixie. Pretty tacky though of the other chickens gawking as she struggled with labor. Can't a girl get any privacy? You, as her birth coach, were allowed and those were great shots.
The original Trixie will have to be checked out. Thanks for the link.

Glad Trixie providing a lesson laying to the other biddies. Isn't interesting how animals seem to know when a special event has happened among them. I am convinced all living things communicate in some fashion.

Congrats to Miss Trixie Go Lay on her first egg. So cute how the others watched. And I love your herb garden.

Wonderful for you and for her~! How special...She was thrilled, no doubt, that she had a pic taken of the egg...*smiles*....

I just wanted to let you know that I have given your blog A BLOG AWARD!

Please visit my blog and check out your award and all the details right here.

Congratulations and I'll see you soon.