" And Then There Were Two " 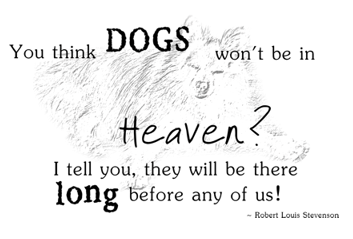 I discovered a few days ago that my precious little Curly not only had the harelip which I discovered at his birth but also a cleft palate. After speaking with the Vet, I took Sadie and the pups in yesterday for a check. Usually a new mother and pups are not checked until 6 weeks but since there was a still birth and cleft palette in the litter they wanted to check them all. Curly was 1/3 the size of his two brothers whom the Vet said were the two healthiest week old puppies he'd ever seen! Sadie also was given an excellent health rating for being a new mother. The Vet explained that a cleft palette puppy requires extensive care such as tube feeding every 2 hours for at least 4 weeks, then every 4 hours for another 4-8 weeks then if it survives, extensive and VERY expensive surgery is sometimes done. However on small breed dogs it is often not successful and on Pekingese, whom have a flat face and nose, it is not recommended at all. The Vet said that the most humane thing to do for Curly, Sadie and me was to euthanize the puppy. My heart was broke and I just could not do it then. After prayer, thought, and conversations with family and friends, I took Curly back to the Vet Clinic this morning. So Curly is in puppy heaven and now there are two. Please forgive me if I'm quite for a day or two and don't make it by your blog to view and comment, if I do, you know I'm in need of a laugh or escape from my anguish. I had been bottle feeding him for several days along with helping him do what little nursing he could, and I had already decided when he was born and I saw his harelip, that he would stay here forever. I did not think his forever would come so soon. :(
You can see in this picture from last night how small he was compared to his brothers. 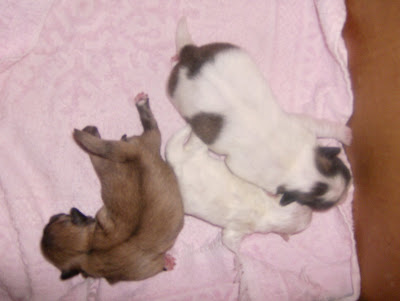 oooh Carol, I'm so sorry ;(
Yes, I do believe animals go to heaven, I have my dad taking care of all of mine, until we are together one day...
I think you made the right decision, I have seen puppies with cleft pallettes it is not something to take mildy.
{Hugs} dear friend, and give mum and brother a gentle pet on the head for me.
Sorry.

For you dear friend.
Jo

Thinking about you and sending hugs xx

I am so so so sorry. I think you made a very brave decision. I hope you feel better soon.

Carol: you are truly in my thoughts and prayers. You gave Curly an amazing gift and for that I am sure he is grateful. :) I am convinced that all dogs go to heaven to wait for us. He will be there waiting for you.

I believe all of my dogs will be waiting for me at heaven's gate and we will march in together.

I hope my long departed Mother is taking care of all of ours. She dearly loved cats, dogs, birds.

Have you ever heard of of Rainbow Bridge? That is what it is about. http://www.petloss.com/poems/maingrp/rainbowb.htm

I cry every time I read it.

I am so sorry. That is the toughest decision a person ever has to make regarding a pet. You made the humane one and I personally believe they do go to heaven and make the children taken too early, very happy.

Oh, so sorry. You must be totally exhausted as well.

I AM READING YOUR COMMENTS AND FEELING YOUR LOVE! THANK YOU !
I AM ALSO FIGHTING BACK TEARS OF GRATITUDE! I WAS SO ATTACHED TO THAT LITTLE MAN, THIS IS WORSE THAN I EXPECTED!

Carol, I'm sad with you. Curly was my favorite from the pictures.

Peace be with you.

Oh. How awful. I am so sorry and will be saying a prayer for you. I know how hard that must have been.

I'm so sorry for your loss, Carol, but I would have made the same decision. Enjoy your two healthy babies!

Carol,
From your comments to my post (Daisy's post) this afternoon, I knew you must be sad. However, reading the details, my heart is hurting for you.
To love a puppy, bottle feeding, holding, checking, making sure he's okay. . . . it is so HARD and there is so much PAIN.
If you need to cry, I'll cry with you. If you need to talk, I'll listen. I am here.
Sharon

Carol, I am so sorry Dear...but know that you did the best you could. There's always room in heaven for puppies...they make the angels laugh.
hugs
Sandi

Carol, I'm so very very sorry about Curly. Made me tear-up... BUT--you did the right thing. He would have struggled and still have struggled. And you wouldn't have wanted him to struggle. BUT---I know how sad you are today. Bless Your Heart.

Oh the poor little thing. You made the right decision but I'm sure it wasn't easy.

Oh Carol, I am so very sorry! I am sure your vet was right, but that doesn't make it any easier.

I have several friends who are dedicated small breeders, and have helped them with whelpings -- and so have seen the joy and also the heartbreak it brings.

It is always the tiny and the weak ones that we get so very attached to; I am sure your heart is breaking, but sadly, in this matter, you had no choice. Nature can give amazing gifts, and also snatch them away.

Go snuggle the other little fellows; they will comfort you.

Oh Carol, I am so sad for you, and know that was not an easy thing to do. Hugs to you for making such a difficult decision.

I am glad you liked the pickles, they are easy..right? I hope to get some more cucumbers so I can make another batch before it is so hot here that the cucumbers die out.

Have a great weekend my friend, hope you feel better soon.

Oh how sad for you. You did the right thing,I hope you heal soon.

Found you via Pastor Sharon...

One of my very favorite Twilight Zones or Outer Limits (I forget which) is the one where the old guy is out walking the dog and finds another guy leaning on a fence that invites him to come on in. Says there's a great place over yonder, but he can't bring his dog. The old guy says no thanks and keeps walking. Meets another guy leaning on a fence who says come on in, there's a great place yonder, and of course his dog is welcome. Turns out the old guy has died, the first guy is the devil (which the dog kind of knew and didn't like him) and the 2nd guy was St Peter and Yonder was heaven.
I think there is a special place in Heaven for doggies. And kitties. And all the critters that make our lives better.

Totally believe animals go to heaven; I can't wait to see my Hannah and Sammy again!

Sending hugs to you.

Carol I hate to hear this. You did the right thing, even though it is SO hard! Love the other two with all of your heart! Have a good weekend...I will be thinking of you

So sorry to hear about your loss. We lost our 17 year old border collie last month and it is not easy. My heart goes out to you.

Came from Sharon's. I love the title of your blog.

In Heaven Curly won't have any health problems. Putting down a dog is right up their with the worst trials and tribulations we can endure. I'm so sorry you had to lose one of those precious puppies.
Elizabeth

Carol - I'm so sorry Curly didn't make it. He was so tiny compared to the other 2. It is so difficult to put down or to lose a pet even if you only had it for such a short time - you just fall in love with them and mother them. I hope you soon get to feeling better and don't blame yourself for having to do this. You know it was best for that little puppy.

Lavender and Vanilla Friends of the Gardens said...

Carol, How sad, but I think you did the best for the little guy. Stevenson is so right he is in heaven. It would not be a nice life for a puppy. I am all for it when it is possible to heal an animal that it has afterwards a decent happy life.
I put you on my bloglist and hope this is alright with you.
Best wishes.

I am so sorry for your loss but it sounds like you did what was best for the little guy. It's always so hard to make decisions like that. Sending you hugs.

Oh Lordy, Carol, I came looking for puppy pictures and read your heartbreaking news. Feel so bad for you. Poor Sadie! Is she fretting? I'm glad she got a good health report. She's really been a trouper, hasn't she?!

So have you, Girlfriend...so have you.

Carol, I am so sorry! Of course animals also go to heaven. I believe easier than we; they don't have religeous disputes and quarrels about who is the right prophet.
It was the best you could do for little curly. Hugs,dear Carol.

Oh dear Carol - it does seem to me, the right things in life are, too frequently, the most difficult to do.
You and Mama in my prayers.